– I was nicely surprised by the ambience, the functioning and the care in the relationships between colleagues.

Warm welcome to Michela Villani, our new guest researcher, who will be at the Centre until June 1 st. She is from the University of Fribourg. 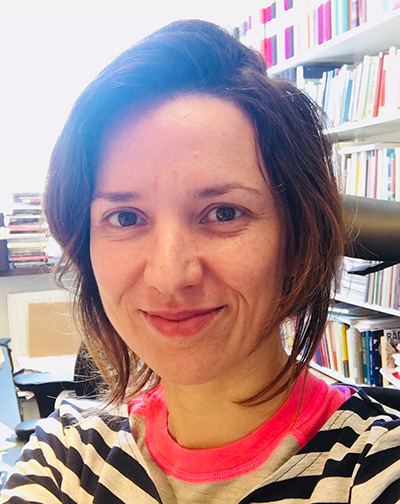 What are your areas of expertise and research areas?
– Sexualities studies, Migration, Medicine, Technologies, Embodiment, Power

Why did you choose to come to the Centre for Gender Research?
– First, because I really wanted to strengthen my background and my analysis in a Gender perspective and benefit from a great environment, very inspiring and diversified as the Center offers. Second, I have mostly be formed in France and I have an in-depth overview of Gender studies, Feminist studies and Women studies conducted in France, as well as the major French references and authors, but I know very little (or at least, less) the Anglo-Saxon panorama of gender and feminist authors, theories and perspectives, which drives more the analysis and reflexions in Nordic countries and that's why I chose Sweden as destination of my visit. Third, I had the chance to visit the Centre for Gender Research in May last year and I was nicely surprised by the ambience, the functioning (in term of management of the space, sharing services, and common time slots every days such as fika) and the care in the relationships between colleagues. I think it is very rare and really productive of a counter-norm and anti-capitalist, which is definitely for me a concrete example of a utopian project!

What is your current research project?
– I am now working on two different research projects. One is called JASS and it is funded by the Swiss National Fund (FNS) in which I work with my colleagues in Fribourg. It focuses on sexualities and racialization of others in the context of migration in Switzerland among young people of first and second generation from sub-Saharan origins. In this project in particular we adopt an intersectional analysis which allows us to show how race and gender produce new configurations in the negotiation of sexual roles. Read more about it here.

Another is called ETHOPOL and is funded by the French National Agency for Research (ANR) and focuses on the government of familiar sentiments in a Foucauldian approach. Within the context of this Research Program (2015-2019) I conducted a research in Italy among couples and women undergoing In vitro fertilization (IVF) and the processual adjustment of the desire of to have a child. Read more about it here.

During my stay in Uppsala I am trying to link my previous researches on clitoral reconstruction in France and the Assisted Reproductive Technologies and  the degree in which the medical technologies are embodied by women in the reconfiguration of desires and perception of the Self (as Woman, as Mother, etc.).

Finally, what is the best thing about Uppsala?
–The powerful light, snow, nature all around and of course the swedish "fika"!